I'm happy to announce that Fyrox 0.28 has been released! Fyrox is a modern game engine written in Rust, it helps you to create 2D and 3D games with low effort using native editor. This release continues a series of improvements and fixes to make game development more convenient. 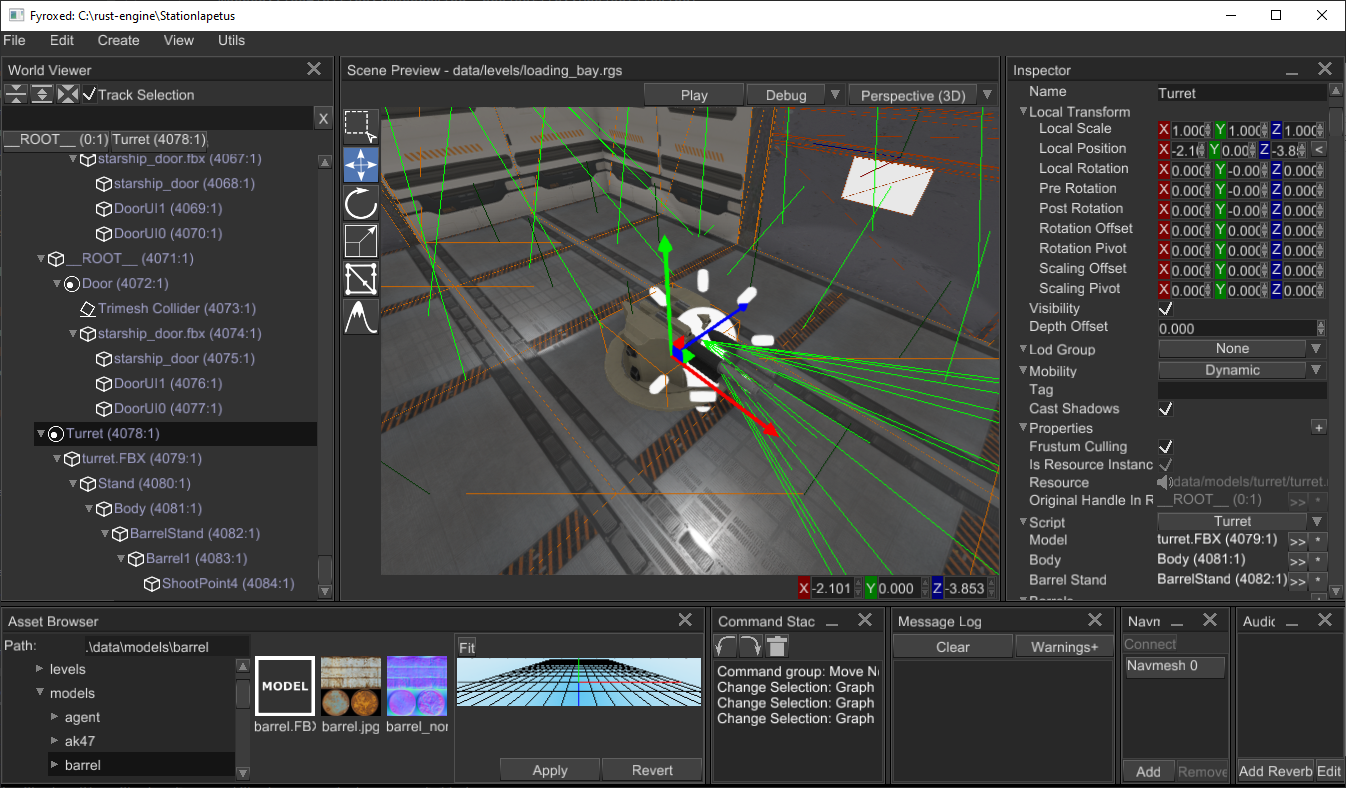 Scripts is the major part of the engine, it is keeps getting improvements and fixes. Fyrox 0.28 has lots of significant changes starting from scripts API and ending by support for saved games.

Some methods of the ScriptTrait were removed and some added. on_remap_handles was removed because node handle mapping is fully automatic (see Automatic Handle Mapping section for more info). on_start method was added to execute some logic after every script instance is already initialized.

Every script method is now accepts ScriptContext parameter by mutable reference due to performance reasons. Previously, it was passed by value and it was more or less ok, but it grew in size and it became inefficient.

ScriptContext now also have elapsed_time field which contains the time that passed since start of your game in seconds. This field could be useful for some procedural animations.

It looks quite convoluted, let's try to understand why. At first, every script method is able to spawn other objects to a scene (instantiate a prefab or create objects procedurally), this complicates update loop significantly. If a new object was added in any of on_init, we must do another iteration of initialization, because we can't call on_start - it must be called only when every script is initialized. on_start in its turn can also spawn something and we can't simply go to on_update, because new instances are not initialized yet! Once everything is initialized and started, we can do on_update - and again it can spawn something... That's why we need multi-pass init/start/update loops. This is the only way to ensure that everything will be updated on current frame and there won't be 1-frame lag. Every inner loop is "fused" - it is protected from infinite loops, that might be caused by incorrect scripts. A script could spawn an object, that in its turn spawn another object, and so on.

The last step is destruction of script instances. It is deferred to the end of the frame mostly due to inability to provide wide context at the point of destruction request. What does that mean? When you delete a node or its script, ScriptTrait::on_deinit should be called, by its definition it requires access to plugins attached to the engine, current scene, etc. It is very problematic to provide such info at every call site, so it just deleted at the end of the frame.

Scripts now fully support standard approach for saved games. Standard approach is to just save current scene to file and load it when there's a need to load saved game. Previously it was quite problematic, because scripts didn't track their start (whether they initialized or not) and call on_init method after a saved game was loaded. Now it is fixed, and on_init is ignored for initialized script instances. on_start method is still called leaving an opportunity to do some actions after a saved game was loaded.

Fyrox uses its own UI system, that provides strong foundation for the editor and every game made with the engine. This release contains lots of small improvements that makes life easier.

There's also support for optional visual effect - shadows. It can be used to make text readable in any conditions. For example, white text with black shadow will still be readable even in bright scenes. It is very useful to create subtitles.

It is now possible to expand or collapse trees by double-click. Previously you had to click on small arrow and this was quite annoying when you have to traverse large trees.

Previous versions of the engine allowed you to instantiate a prefab by drag'n'drop it from Asset Browser to a scene, but every instance was placed at (0, 0, 0) and there was no preview for an instance being created. Now it is fixed and it significantly improves workflow in the editor - you can see where your object will be created. Here's a small gif that shows how it works:

At first let's understand what is property inheritance. Property inheritance is used to propagate changes of unmodified properties from a prefab to its instances. For example, you can change scale of a node in a prefab and its instances will have the same scale too, unless the scale is set explicitly in an instance. Such feature allows you to tweak instances, add some unique details to them, but take generic properties from parent prefabs.

Property inheritance works for prefab hierarchies of any depth, this means that you can create something like this: a room prefab can have multiple instances of various furniture prefabs in it, while the furniture prefabs can also be constructed from other prefabs and so on. In this case if you modify a property in one of the prefabs in the chain, all instance will immediately sync their unmodified properties.

The next thing that was improved is node handle mapping. What is this anyway? When you save a handle to some node in your script it must be mapped to respective copy when you cloning the node with the script. If you don't do this, the handle will point to initial object, from what the copy was made. In most cases this is undesired effect and mapping should be done.

As an example why node mapping is important let's imagine that you have a door script that is applied to some sci-fi door. The script controls door movement as well as behavior of lights on the door. To control lights, the script must know their handles. Now what will happen with handles if you clone a door with the script? If there wouldn't be handle mapping, handles of light sources would be copied as is and multiple door instances would control few light sources of initial door. But we need each door to control its own set of lights, that's when node handle mapping comes into play. When your copy an object, the engine maps handles stored in cloned objects to their respective copies.

As with property inheritance, this mechanism was available in previous versions of the engine. You might remember ScriptTrait::remap_handles method, it forced you to do tedious manual work for every handle. Such manual work was a constant source of bugs, and it is now replaced with fully automatic solution based on reflection.

Sprite sheet animation is a simple technique that allows you to keep frames of an animation in a single source (file in most cases). Instead of having a texture per each frame, you have a single texture and to perform actual animation you just change texture coordinates on a sprite. This is much more effective approach in terms of performance. Typical sprite sheet could look like this: 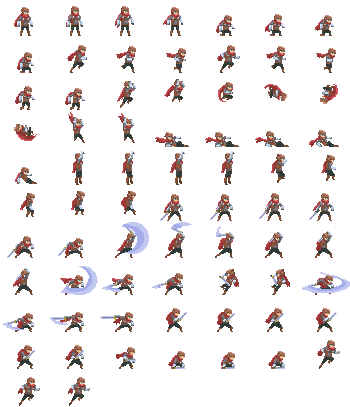 This functionality was requested dozens of times already and now it is available. However, there is no dedicated sprite sheet editor, so it is a bit tedious to fill frames for sprite sheet animations in the editor. For now you need to calculate offsets manually for each frame. This will be improved in next version of the engine. 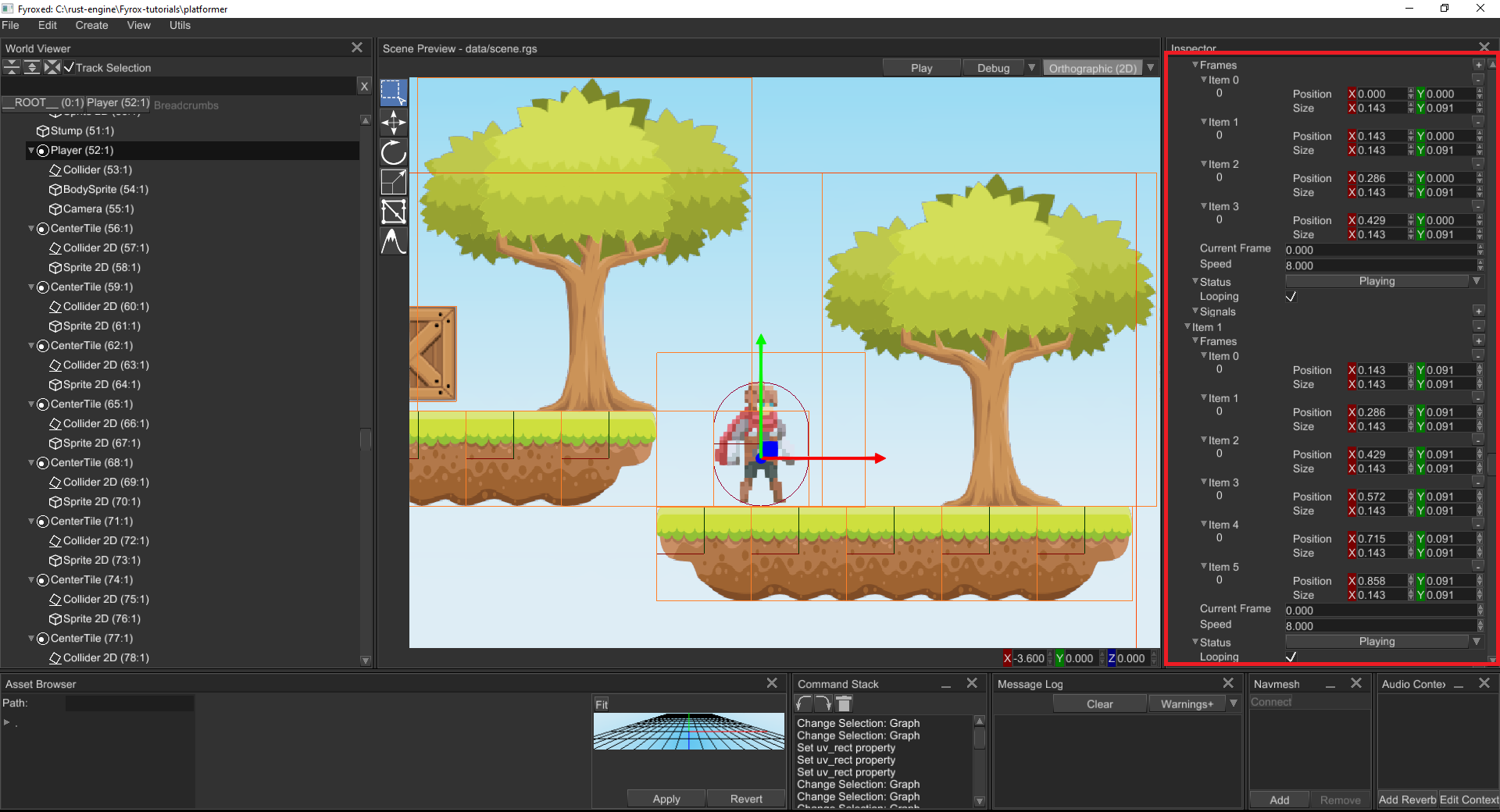 It is also possible to attach signals to specific frames in an animation. This functionality could be useful if you want to "attach" some action(s) to specific key frame. For example, you may have a walk animation and want to emit sound on every key frame where feet touch ground. In this case you just need to add a signal to these frames and then process events from the animation to emit sounds.

From the very beginning, the engine didn't let you to borrow multiple objects from a pool simultaneously. Now it is fixed by adding a special fixed-sized multi-borrow context. It is a fixed sized storage for borrowed handles, that enforces borrowing rules at runtime. It is now possible to borrow multiple mutable references to unique objects at the same time. The same is applied to Graph, it now has Graph::begin_multi_borrow method.

The editor is a major part of the tool set and it has quite a lot of improvements itself.

Search functionality in the World Viewer is now case-insensitive, which makes filtering much more user-friendly.

It is now possible to change type of existing scene node. This functionality is very useful if you want to change type of the root node of your scene. By default, its type is Pivot, but in some cases you may want to make it Rigid Body. This could be useful if you're making some character prefab and want the root node to be root node of the instance. To use this functionality, just right-click on a node in the World Viewer and select Replace With: 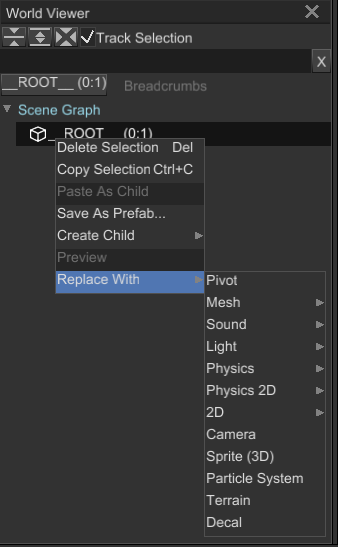 Fyrox 0.28 adds a list of recent scenes to File menu in the editor. It makes switching between scenes much easier. Future versions of the engine will also add support for editing of multiple scenes at once without a need to switch between them.

The editor now saves position and orientation of preview camera in settings - this is very handy when you switching between scenes and the camera restores its position when a new scene is loaded.

Track Selection option is now saved in the settings file too, this option is used to keep selected node in view in the World viewer.

Interaction modes (the left tool bar in the Scene Preview window) are now correctly highlighted. Previously it was quite hard to tell which mode is currently active. Navmesh and terrain edit modes now have their own hotkeys ([5] and [6] respectively).

In 0.27.1 there was an issue with inability to assign scripts for nodes in some cases, this is now fixed. A script that have any resource field (Model, Texture, etc.) could crash the editor in previous version, this is now fixed too.

The book (opens new window) has some improvements too - it was restructured, added info about property inheritance terrains, particle systems, etc. Tutorials were updated to use latest engine version.

Station Iapetus (opens new window) is sci-fi shooter that is built using the engine. Recently it was fully migrated to scripting system. While it is still in very early development stage, it could be a good example of how to use the engine in a large project.

There are few new features planned for the next version of the engine: sprite sheet animation editor, ability to edit multiple scenes at once, generic animation editor. As usual, the engine will be improved in terms of usability and quality.