I'm happy to announce that Fyrox 0.27 has been released! Fyrox is a modern game engine written in Rust, it helps you to create 2D and 3D games with low effort using native editor. This release contains lots of improvements for existing functionality that makes game development much more comfortable. The list of changes is quite big, so let's get started!

Before we start on "boring" text, take a look at this video, it captured from the new project based on the engine - Fish Folly (opens new window):

Fish Folly is a 3D platformer that uses latest engine features at full capacity, it may be very helpful to learn how to build relatively large game with scripts and plugins.

The feature is very powerful, it helped to refactor how the editor handles property modification of entities. The editor uses Command pattern for undo/redo functionality, each action is encapsulated in an object and it has standard methods like "execute", "revert", "finalize". Before reflection, to change a property you was forced to create a command that will swap previous value with a new one. As you probably already understand, it resulted in tons of boilerplate code that was hard to maintain. Reflection helper to remove 90% of boilerplate code by adding universal command that simply gets new value, finds a field using its name and sets the value to it.

Scripts were the second place where it was used - ScriptTrait::on_property_changed method was removed. There is no more manual handling of changed properties, reflection does everything for you.

Reflection is still lacks some functionality, which will be added in the future, but given the fact that it was added in just a week is quite impressive.

Fyrox 0.27 has significant changes in API for plugins. Previously, plugins execution flow was like this:

This structure was an attempt to run a game directly inside the editor, but it failed for three main reasons:

The only viable solution for this is to run a game as a child process of the editor. This solves all of the above problems at once and significantly simplifies execution flow for plugins. Execution flow now is very straightforward: initialization -> update loop -> destruction.

The only thing that is now a bit "weird" is plugin instantiation, it is now decoupled from the plugin itself. There is a separate trait called PluginConstructor for that purpose, so typical plugin skeleton looks like this:

PluginConstructor is now responsible for script registration and plugin instantiation. Why this is needed? The editor does not need an instance of a plugin, it only needs information about scripts. So the engine now does not create plugin instances, until internal call of the engine.enable_plugin(..) method which in its turn will call create_instance. The editor will just call register method from PluginConstructor and will get information about scripts.

Previous version (0.26) has major problems with scripts which are solved in 0.27:

Some other minor improvements includes dynamic typecasting for scripts, inner component providing and some other small fixes.

fyrox-ui now support high-DPI screens. This feature is now used in the editor, it was requested a lot of times and now it is available! Previously, the editor was too small on high-DPI screens and pretty much unusable, in this release editor's UI will scale using system UI scaling factor. This is how the editor looks with various UI scaling: 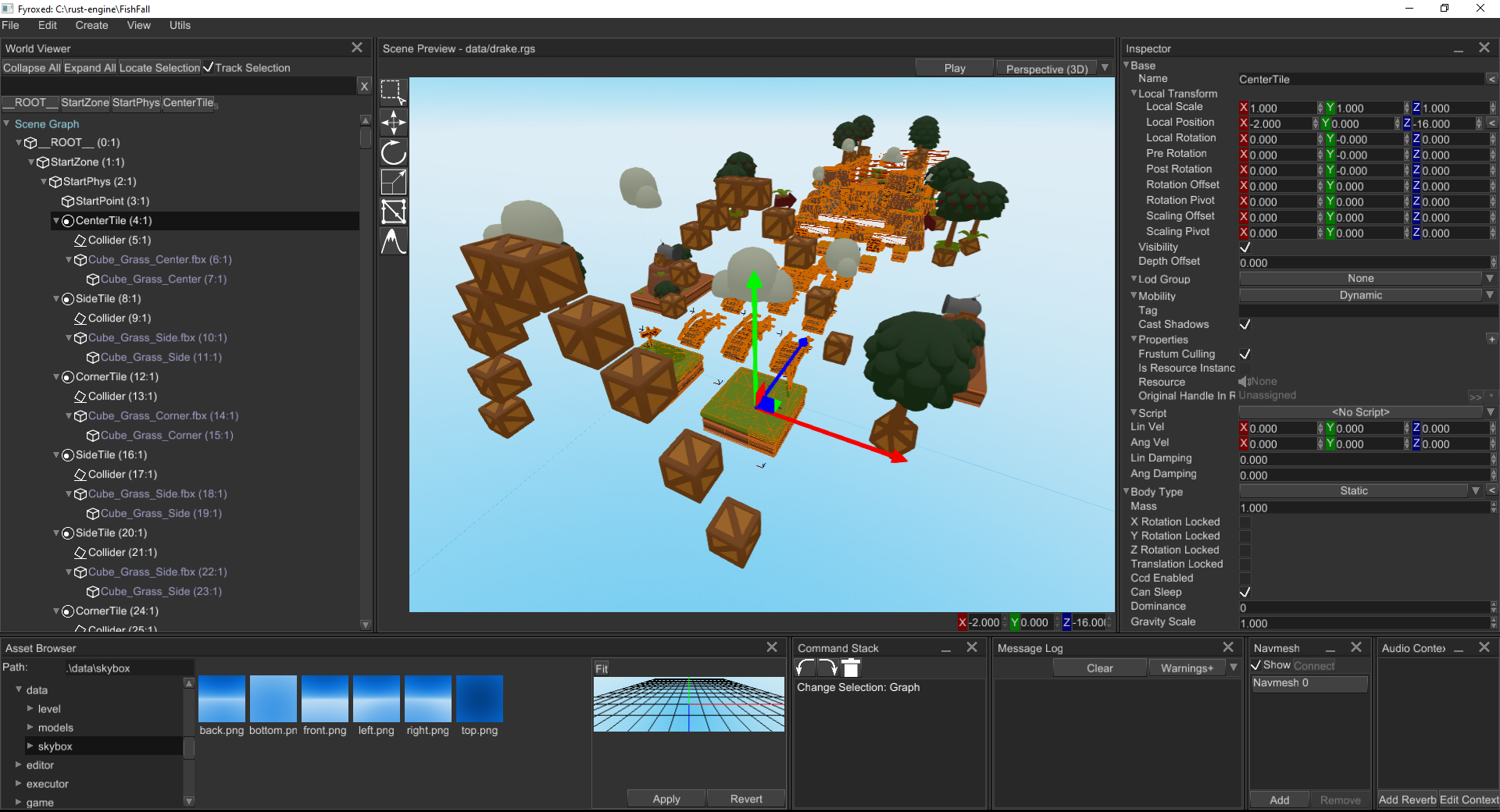 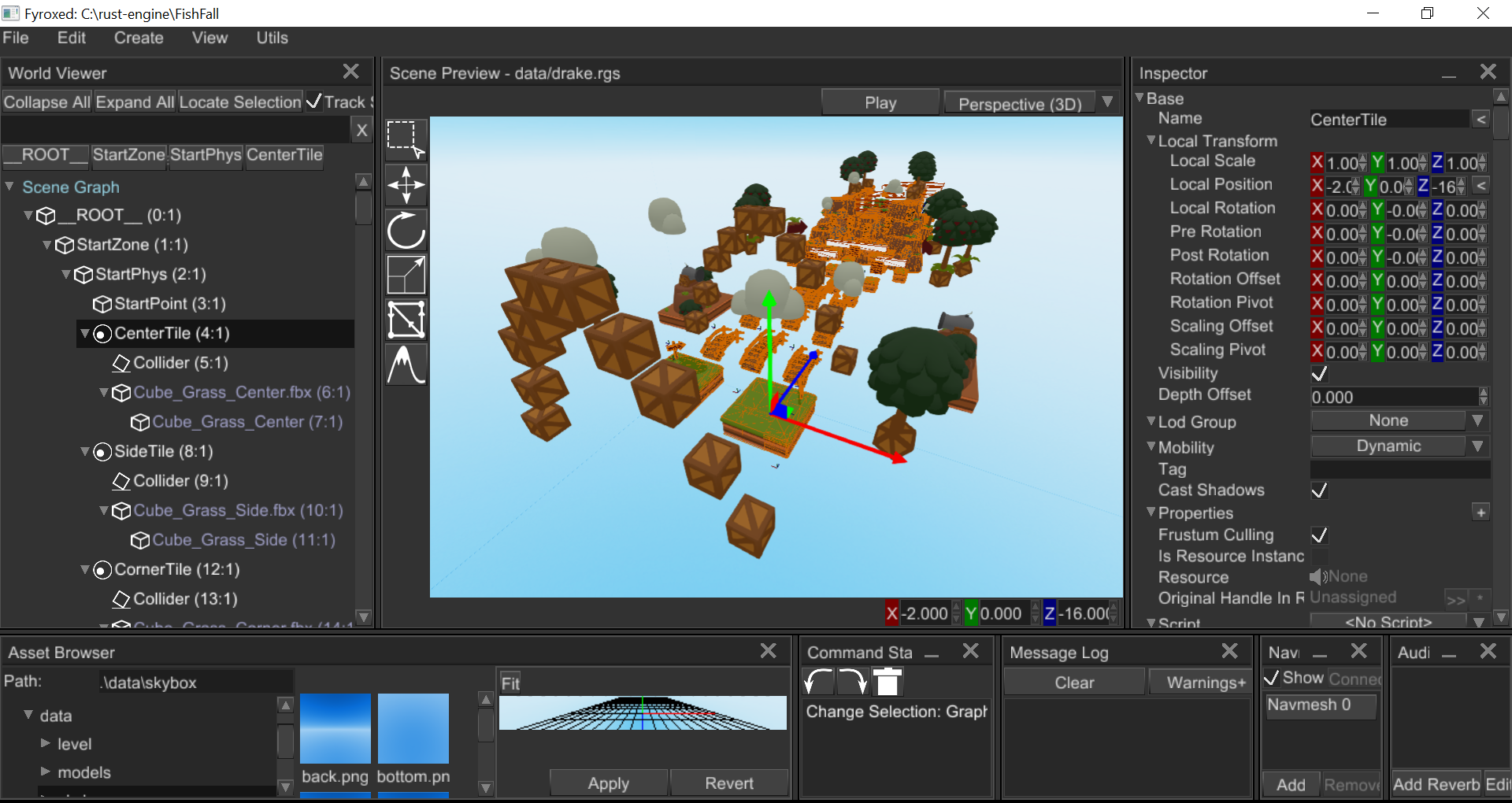 Joints now use automatic binding, this means that joints use their global transform to automatically calculate local frames for connected rigid bodies. It is a very intuitive way of creating joints. Here's a quick example: 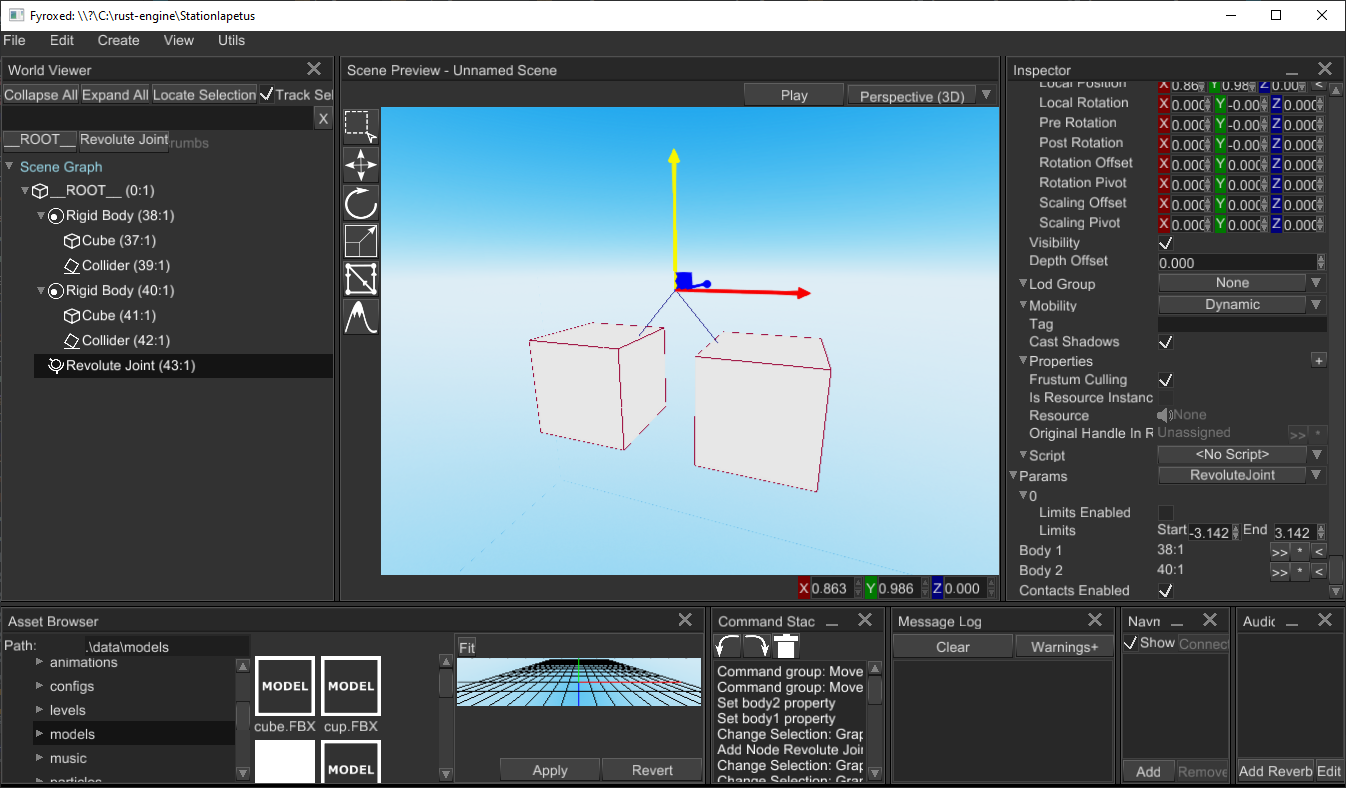 The joint (revolute) is depicted as two blue lines, connected bodies will rotate around local X axis of the joint. It is also possible now to disable collisions between connected bodies of a joint.

It is also possible to "rebind" connected bodies, this can be achieved simply by moving the joint.

Rectangle node now has an ability, that allows you to specify image portion for rendering - the property is called uv_rect. It can be used to create sprite sheet animations or to animate textures on rectangles for some specific effects like waterfall, etc.

Button widget now has an ability to change its content via special message ButtonMessage::Content, it is now possible to change button content at runtime.

A BitField widget was also added. BitField is a simple widget that shows numeric values a set of individual bits, which makes it easier to switch separate bits. It is now used to show pair-wise collision filtering masks for colliders: 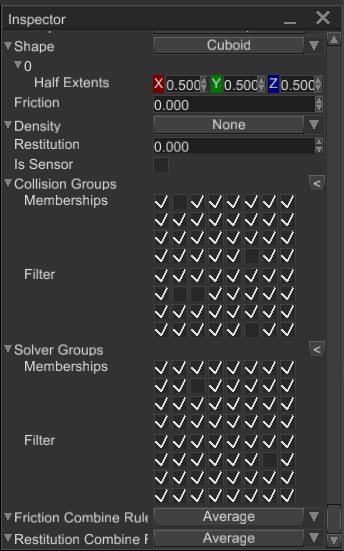 As you may have noticed already, Inspector widget is now much more compact. It now uses adaptive rows for each property, which allows a row to "fit to content". This solved few issues when a row was clipped because of fixed row height.

NumericUpDown widget is now supports "read-only" mode. It prevents editing values, but allows you to select and copy them.

The editor now shows more information about scene nodes that does not have graphical representation, this includes light sources, camera, joints, rigid bodies, colliders and so on. 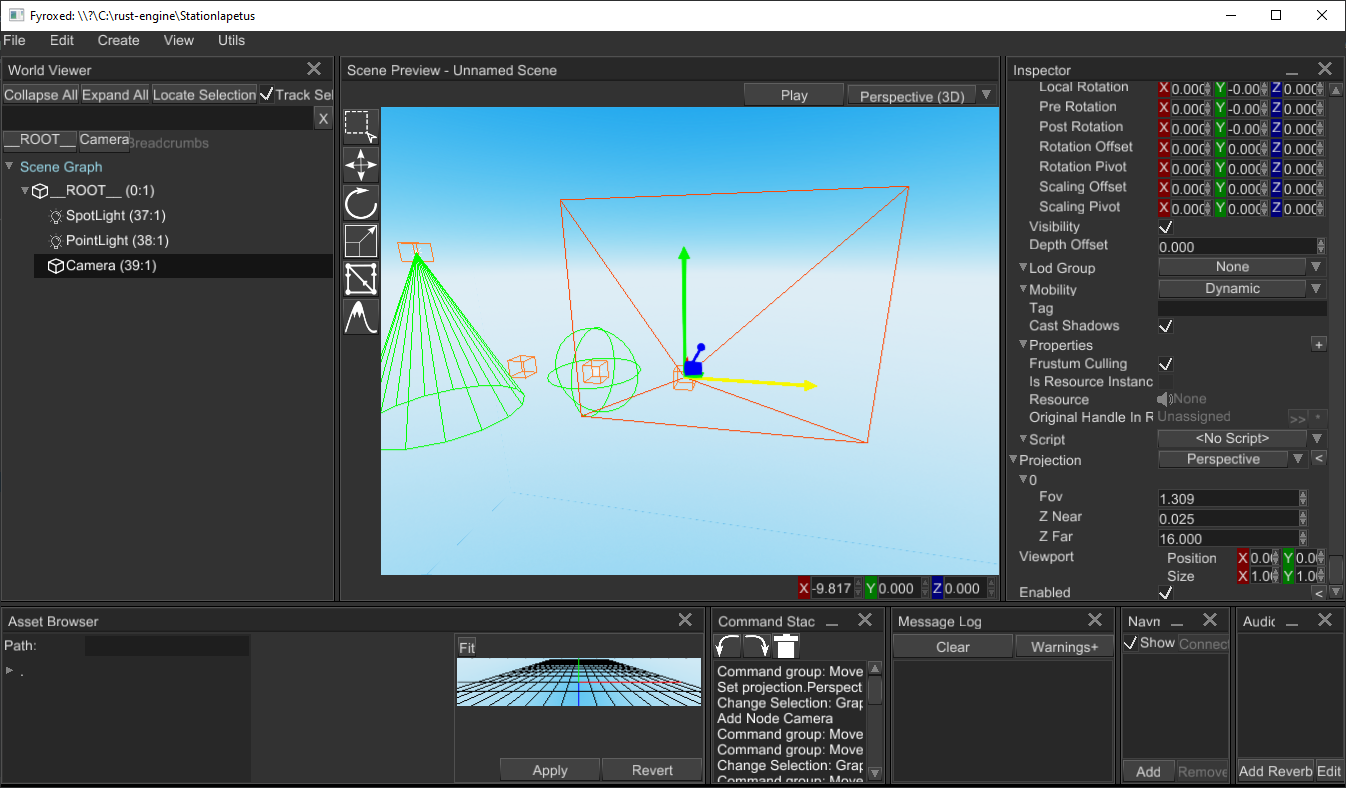 This may seem tiny improvement, but in some cases it helps a lot. The main issue is that scene nodes using only local coordinates, while global coordinates are derived - they're calculated using global transform of parents. Global transform of a node is "packed" in a matrix and it is not shown in the Inspector.

Newly created cameras are now enabled by default, preview functionality was moved to the context menu of World Viewer. Once you click on "Preview" menu item, the editor will disable all other cameras and will render currently loaded scene using the selected camera. To leave preview mode just click "Preview" again.

Context menu for asset items allows you to open, delete, show-in-explorer items and also to copy file name and full file path to the clipboard.

Framework is now removed, it is replaced with plugins, because they now have exactly the same functionality. All book sections that were using framework are removed too.

fyrox-template is a simple CLI-tool that assists you in project skeleton generation. In Fyrox 0.27 it has two new features.

--style 2d|3d key allows you to select a scene of your new game, by default this parameter has 3d value. Style does not restrict your project at some particular game style, it just creates a scene with specific nodes:

Executing this command will generate my_script.rs in game/src folder with following content:

All you need to do manually, is to add the script to module tree using mod my_script somewhere. Comments should help you to understand what code should be where.

Next version (0.28) will focus mainly on polishing the existing functionality, which means add missing methods to the API, ensure that all parts are working together and nothing is getting in a way of completing a game. Good documentation is the key to understand how the engine works and how a particular task can be solved using it, so the docs and the book will be also improved. There're quite a lot of functionality already implemented which is not easy to use, such as light mapping, the next release will make sure that most of the features are good in terms of usability.

The engine still missing one important part - animation editor, now when reflection is added to the engine, it is possible to implement the editor. Since it is a huge tool itself, it probably won't get in 0.28, but 0.29 will have it for sure.